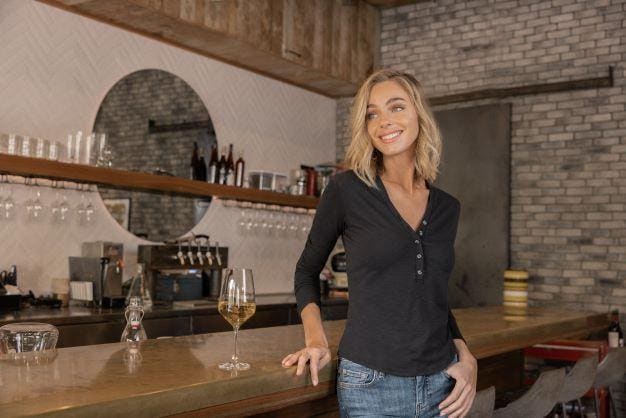 It was an opportunity begging to happen. Recognizing that 30% of TravisMathew customers are women – the wives or girlfriends of the TravisMathew man – the collection of elevated basics and golf apparel decided to target the women.

TravisMathew took its time developing the women’s collection, which launches May 5. The company, which. is owned by Calloway Golf, wanted time to do its homework and find out what women really want from the brand. It turns out, they want everything the men have, except golf wear won’t be part of the mix, at least not initially.

“What’s fascinating about the brand is that 30% of our current customer base is a woman shopping for a man in her life,” said women’s project director Lindsay Browder. “We feel like we have this incredible audience that loves our fabrications and loves what we’re doing on the men’s side. That’s a little bit about why we’re launching now. We feel like this woman has kind of been begging for it and it feels like we’re almost doing a disservice by not bringing it to market at this time because we have that customer that is so engaged with us.”

Inspired by the coastal California lifestyle, TravisMathew women is intended to bridge the gap between comfort and fashion. TravisMathew, the core men’s wear brand, is worn on and off the golf course, and has a celebrity following that includes Chris Pratt, Jimmy Garoppolo, Alex Caruso and Jon Rahm. The brand, which saw healthy year-over-year growth, was acquired in 2017 by Callaway Golf.

“We’re already growing at a rate of 30% per year,” said Browder. “There are so many brands out there, we didn’t want this to be just checking a box for us. So many brands do it as an afterthought or dip their toe in. The leadership of TravisMathew didn’t want to be inauthentic.

“We’re doing this after spending the last 10 years of talking it through,” Browder added. “We built this really clear brand focus that’s incredibly stable. I’ve been marinating in it in my own way, and we’ve all been really patient with the concept, so it finally felt like it was the time to do it right. We put together the business plan for women’s during the pandemic.

“We’re in a super-confident spot to know we have the foundation to do it right in a very thoughtful and patient way and take that path and fully flesh out the vision,” Browder continued. “It has a lot to do with design and product, but it also has to do with strategy, and how each collection kind of grows and builds, until we get to this fully conceptual place with the fashion brand we’re planning to be.”

Browder said that women shopping Travis Mathew for their significant others understand the brand and have a history with it. “We think of the woman as being very authentic and having this busy life and really wanting to utilize the brand in the same way that men’s customer does,” she explained.

TravisMathew for women will be distributed via a direct-to-consumer strategy initially, with expansion into wholesale channels anticipated in the future. If the brand has a successful introduction, Browder said TravisMathew women will be sold at wholesale partners down the road.

“Right now, we feel like staying as close to the customer as possible,” Browder said. “When we launch in a couple of weeks, it will be sort of a soft launch with a 20-unit collection to get product out into the market and understand the customer’s feedback. We’ll obviously have social media plays and the collection will have a presence in all 40 TravisMathew stores, as well as our e-commerce platform. There’s not going to be any targeted efforts to seek out those 30% of women, and go after them. We’ll focus on it from something of a different angle.

“We’re not planning to wholesale women’s at this time,” Browder said, noting that the wholesale channel pushes would push the production timeline out six months and “obviously in the nightmare that is global production right now, we can’t afford to lose those six months. We really want to stay closer to the customer because we have to have the ability to pivot so it assures us that by the time we get to the wholesale customers, we’ll have done the heavy lifting so we’ll be able to say, here’s what’s working let’s build this together.

In April and early May, the collection will be offered at TravisMathew’s freestanding retail doors and the online channel, Browder said. “We have such incredible retail partners – our men’s brand is number one at Nordstrom in their sportswear division. It’s wild how well the men’s brand is doing. There’s not a lack of female customers beating down our door, we feel like we need to be really nimble and stay really close to the customer right now so we’re going to hold off on the wholesale channel a little bit.

“We’re so excited about is trying to create the same following and passion that people have for the men’s brand,” Browder added. “Being number one at Nordstrom blows us away. There’s a lot of opportunity when about 30% of current customers are a woman making the purchase, so we’re really excited about capitalizing on that. We feel that over the next three years, women’s could realistically make up 20% to 25% of our volume.”