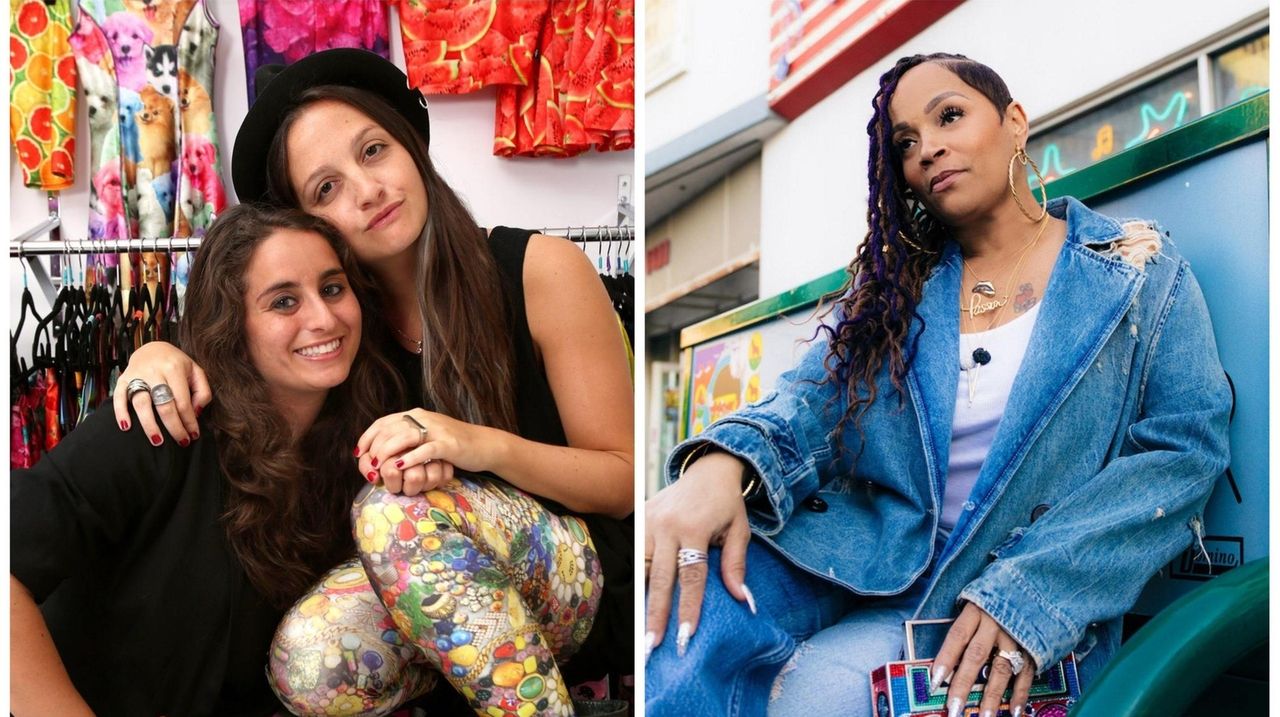 Long Island happens to be a breeding ground for fashion creativity. Big names such as Michael Kors (Merrick) and Donna Karan (Hewlett) hail from our stylish stamping grounds, both among fashion’s important players. But there are others — and some, newcomers — who have plenty of style and have launched their own brands you can shop now:

When Katie Sands, 27, the lifestyle influencer behind the @honestlykate handle says she wants your opinion on something, she really means it. During her several-month quarantine at her folks’ home in Locust Valley where she grew up, she tapped her almost 280,000 Instagram followers for their thoughts on what would make a perfect athleisure line. And then, in a collaboration with NYC-based activewear manufacturer Phat Buddha, she created one: HKxPB — Honestly Kate by Phat Buddha — a collection of bra tops and leggings in rainbow colors that her audience helped design.

“It was such a collaborative experience,” says Sands who dubs her collection, “For You, By You.” She says her “fellow creators” even chose the colors in the collection via Instagram polls. The end result is 17 pieces in different colorways divided to create three separate drops. The first comprised of six items is already out and comes in brilliant shades of yellow, pink, blue and natch black, which actually sold out, says Sands “in two minutes.” The others sold out in two hours but she was able to order restocks on them. The second collection will be available in September and the third in October. All the pieces in the collection are under $100.

WHERE TO SHOP: phatbuddhawear.com and Bandier stores in Manhasset and Southampton

“I’m definitely a hoop girl,” says Simone I. Smith who splits her time between Manhasset and Los Angeles. She’s worn big, chunky earrings since she was a teen (in fact, her most memorable pair was a gift from her now-husband, Todd Smith, aka LL Cool J, when she was just 17).

Today, her jewelry collection, which she launched in 2011, is vast, available online at Macy’s, Kohl’s and upscale boutiques at many price points and includes earrings (with fans such as Mary J. Blige, Rihanna and Hoda Kotb), necklaces and bracelets. There are also her famous “A Sweet Touch of Hope” lollipop pendants — sparkly pops on a chain that represent her battle with cancer — each piece includes a small divot in remembrance of her invasive surgery that required her right tibia bone to be replaced. She donates a portion of proceeds from every jewelry sale to the American Cancer Society.

WHERE TO SHOP: Simoneismith.com; Macy’s and Kohl’s stores

Founded in 2008, Terez started as a luxury handbag company in the basement of Zara Terez Tisch, 34, parent’s home in Atlantic Beach. Joined by her best girlhood friend, Amanda Schabes (Long Beach) the business morphed into the wildly-graphic leggings and activewear resource it is today. You’ve probably seen their stuff that includes vivid photo prints of gumballs, Fruit Loops and emojis for kids along with more sophisticated prints for adults.

Terez is sold in hundreds of department stores, specialty shops and online all over the country. Although Schabes no longer works in the business day-to-day Terez Tisch is still at it. “I’m very proud of what we’ve accomplished. I’ve always wanted to do something that made me and other people feel good. It’s all about creating a platform that focuses on joy and positivity.”

If you’ve shopped for luxury eyewear, you’ve probably made your way to one of the five Long Island Optyx locations in Port Jefferson, Port Washington, Wantagh, Greenvale, Woodbury, Huntington and East Hampton where the big-name brands such as Chanel, Gucci and Celine abound. But less well-known but selling well, are new frames by owner Harvey Ross, who lives in Muttontown. These cool, made-in-Italy frames are much less expensive than the designer names (around $199) but deliver high style in acetate and boast details such as quilted temples all under the brand name “Harvey’s.”

A decade ago, Great Neck South high schooler Danielle Bernstein bolted out after school to hit up Macy’s, where she says she’d “scour” for the newest items. Now, Bernstein, a fashion influencer and the founder of the blog, WeWoreWhat, has her very own eponymous brand exclusively at her old stamping grounds. “Danielle Bernstein for Macy’s is my ode to my childhood self, it’s a way to bring my brand to the masses and pay tribute to the girl I was before WeWoreWhat,” the 27-year-old says. The brand, which first launched in March, is a byproduct of her WeWoreWhat blog where Bernstein broadcasts a carefully curated look at her own life. The 22-piece, sizes 00-24, ready-to-wear collection includes items each design priced under $100. The summer collection was released in June.

“We love Danielle,” said Sydney Cano, 24, of Franklin Square who shopped the debut collection. “We’re so excited to get a look like hers, it’s all basic but essential fashion,” said Cano who expected to spend around $250 on several items including a cute puff-sleeved cropped jacket and a blousy bodysuit.

WHERE TO SHOP: Macys.com

Sisters Kim, 36 and Nicole Carosella, 38, grew up in Cold Spring Harbor and attended East Woods School in Oyster Bay. They opened their design studio in 2008 under the brand name Sorellina, which means “smaller or younger sister” in Italian. It was chosen, because says Kim (who is the director of operations), “We wanted the name to be about the two of us and a nod to our Italian heritage. Even though I’m the younger one, Nicole,” (creative director), “is smaller than me so it works both ways.”

Their jewelry has a vintage-modern vibe and includes Art Deco influences and blackened gold details. Much to their delight, luminaries such as Lupita Nyong’o and Jennifer Aniston have worn their stuff. Prices range from $450 for stud earrings in onyx, moonstone and quartz to $24,000 for an emerald necklace. Over the years, their business has grown dramatically and they’re sold at upscale jewelry stores and boutiques all over the country and internationally, including right here at the Americana Manhasset in Hirshleifer’s.