Occupancy limits and no fitting rooms: Shopping in the COVID-19 era 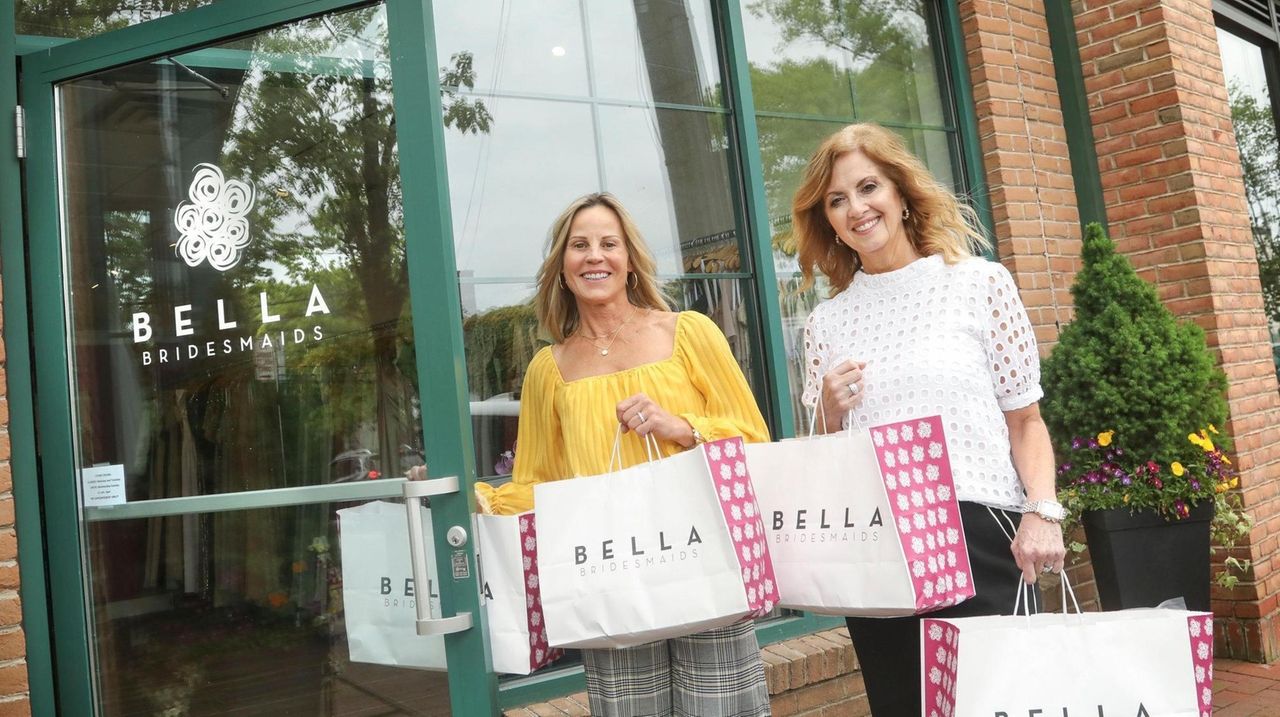 The COVID-19 pandemic has changed the way the world shops, perhaps for good — leaving shoppers to adjust to a new normal, and already struggling brick-and-mortar retailers to face new challenges.

Hundreds of stores across Long Island are preparing to open their doors to in-store shopping next week for the first time since March, taking steps to make shoppers and workers comfortable returning. The measures range from providing hand sanitizer throughout stores and installing Plexiglas at checkout counters to restricting or eliminating dressing rooms and makeup counters. Many retailers will check employees’ temperatures, and a few small stores may even check customers’ temperatures.

Enticing shoppers back and reviving consumer spending — which accounts for 70% of economic activity, according to the Federal Bureau of Economic Analysis — is critical to pull Long Island, as well as the state and the nation, out of the pandemic-induced recession.

In Phase 1 of the region’s reopening, Nassau and Suffolk County retailers classified as non-essential were allowed to begin offering expanded curbside and in-store pickup beginning May 27. The Island is on track to hit Phase 2 Wednesday; it will allow in-store shopping with restrictions, such as not allowing store occupancy to go beyond 50% of capacity; requiring that employees and customers wear masks; and ensuring 6 feet of distance between people.  Shopping malls won’t be allowed to reopen until Phase 4, probably in July, but mall stores with their own entrances may open in Phase 2.

“At the end of the day it will be consumer confidence that will determine the success of Phase 2.  As a result, we anticipate the road to COVID-19 recovery will be longest for the retail industry, which needs to attract foot traffic in order to restart their businesses,” said Kyle Strober, executive director of the Association for a Better Long Island, a Hauppauge-based economic development group.

Brick-and-mortar retailers already were contending with Amazon and other online competitors taking a growing share of sales pre-COVID, and the virus pushed more consumers to purchase online — and to purchase things they might not have considered buying online before.

While overall ecommerce sales were up 49% in April nationwide, online sales of groceries grew 110% between March and April, according to Adobe Analytics, a division of San Jose, California-based software company Adobe Inc.​

Orders of items bought online and picked up in stores, which includes curbside pickup, increased 208% in April compared to the same month last year, according to Adobe.

As retailers reopen, they are going to try to make the experience as normal as possible while adhering to safety measures, said Ted Potrikus, president and CEO of the Retail Council of New York State, a trade organization based in Albany.

“How they do that is going to be different for every store, but I think it’ll be the same overarching theme: keep it clean, keep it sanitized, stay socially distanced and wear a mask,” Potrikus said.

In addition to Plexiglas barriers at checkouts, he said shoppers can expect floor markings to indicate social distancing rules and shorter operating hours, to give store personnel more time to clean.

Other measures may include signage directing customers one-way through store aisles, not putting returned items back on the shelves immediately, and hanging clothing so customers can see it more fully without touching it, said Sucharita Kodali, a retail analyst at Forrester Research Inc., an advisory firm in Cambridge, Massachusetts.

Temperature checks on employees will likely be commonplace, even though it is a “coarse screen” that won’t pick up asymptomatic and presymptomatic infections, said Nellie Brown, director of Workplace Health and Safety Programs for the Worker Institute at Cornell University’s School of Industrial and Labor Relations.

Some retailers will do temperature checks on customers, too. That’s more likely for those that  “are not high-volume retail settings,” Brown said.

At the Bella Bridesmaids franchise in Huntington village, where bridal parties would normally come in to try on sample bridesmaid, flower girl and mother-of-the-bride dresses before purchasing online, owners Christine Lyons of Smithtown and Angela Vomero of Centerport said they’ll do temperature checks on themselves and their customers when they reopen.

Groups will be limited to eight, and customers will be required to wear masks. The store will make one appointment an hour instead of two, to allow for cleaning between visits. Dresses will be sprayed with Lysol after try-ons and removed from racks for 24 hours, Vomero said.

While Bella has been closed to in-store visits it has offered curbside pickup of items, most of which were ordered before the shutdown.  Bella also is sending “borrow boxes” of sample dresses to brides to distribute to their bridal parties for trying on and returning.

“It’s slowed down a lot. …We’re not even close to our numbers before COVID,” Lyons said.

But she and Vomero are optimistic.

“Weddings are going to happen forever.  Are things going to be different?  Absolutely,” Lyons said.

At Kohl’s, that will include reducing store hours to 11 a.m. to 7 p.m., having an employee at the front of each store sanitizing shopping carts after each use, closing fitting rooms, eliminating beauty product testers and removing in-aisle fixtures to increase space between customers, according to guidelines on the Wisconsin-based retailer’s website.

At Macy’s, bra fittings and alterations will be temporarily paused, ear piercing will be suspended at stores that offer that service, customers will be required to use hand sanitizer before trying on jewelry and watches, and they won’t be allowed to touch beauty testers.

Macy’s fitting rooms will remain open but merchandise tried on “will be held aside in a segregated collection depot before being returned to the sales floor,” spokeswoman Emily Goldberg said.

When they can reopen, Roosevelt Field mall in Garden City, Walt Whitman Shops in Huntington Station and Smith Haven Mall in Lake Grove will be following protocols set by their owner, Simon Property Group Inc. of Indianapolis.

The protocols, listed on Simon’s website, include having hand sanitizer in malls’ common areas, reducing and/or reconfiguring public seating and eating areas to allow for minimum separation of 6 feet between people; taping off every other sink and urinal in restrooms to encourage proper spacing; and limiting maximum density to 50 square feet per person on the property.

“If the targeted occupancy is achieved, other customers … will be asked to wait in their cars or in queue lines outside, spaced 6 feet apart,” Simon said.  A company representative declined to comment further.

The Macerich Company, the Santa Monica, California-based owner of Green Acres Mall in Valley Stream, did not respond to a request for comment about changes it will make at the mall.

The owner of Westfield South Shore in Bay Shore and Westfield Sunrise in Massapequa is Paris-based Unibail-Rodamco-Westfield, did not respond to an inquiry to its U.S. headquarters in Los Angeles.

Even with all the changes designed to restore consumer confidence, many analysts said the return of customers will likely be slow, as people remain fearful of the virus.

Retail landlords are working with business owners to ensure stores survive the pandemic, as there is no longer a line of new businesses looking to take over vacant space anytime soon, said Strober, of the Association for a Better Long Island.

Small businesses, with less capital going in, will bear the brunt of the losses from the shutdown and slow recovery, experts said.  On Long Island, 90% of establishments are small businesses, said John Rizzo, chief economist for the Long Island Association business group.

“I’ve heard the observation that we may lose 20% of small business that may never come back.  It’s going to be a big number,” said Rizzo, who said that large-chain retailers, such as Walmart and Target, have been unfairly allowed to remain open as so-called essential businesses, while mom-and-pop stores were shuttered.

Walmart, Target, Costco and other big-box retailers were deemed essential because they sell groceries, personal care products and prescriptions.

Among commercial real estate segments on Long Island, retail has been hit the hardest by COVID-related business losses, according to a survey released last month by the Association for a Better Long Island and Long Island Builders Institute.

Almost 35% of retail landlords responding did not receive rent from more than half their tenants in May, the survey found.

A moratorium on  evictions for rent nonpayment because of the pandemic has been extended to Aug. 20, but landlords and tenants worry about what will happen after that, since the moratorium doesn’t wipe out the debt.

“We’ve been trying to work with our tenants to create payback schedules, so we can spread it out over time.  We want our tenants to succeed,” said Aaron J. Fleishaker, executive vice president of Mattone Group, a real estate investment company in College Point, Queens.

Mattone owns the Roosevelt Raceway Plaza in Westbury and other shopping centers and freestanding retail buildings on Long Island and in New York City, Connecticut, Florida and Georgia.

The company is trying to help its tenants by creating more outdoor seating for restaurants at its properties and lifting its ban on retailers displaying and selling merchandise on sidewalks, Fleishaker said.

Retail recovery is going to be a tough haul for Long Island because it has so much more retail space than other metro areas and because widespread retail bankruptcies and store closings are expected, said Rachel Johnson, associate director for market analytics at CoStar Group, a Washington, D.C.-based real estate information provider.

Long Island has 53 square feet of retail per capita, compared to 35 for the nation, according to CoStar.

Marianna Cucchi is one small retailer determined to survive. She kept her 13-year-old Port Jefferson bath and body products boutique, The Soap Box, above water during the shutdown by selling products online, but business is down about 50%, she said.

“Needless to say, it’s been terrible, a major downturn,” she said.

She’s even been delivering products herself to customers’ homes.

After her store is allowed to reopen, changes will include the elimination of tester bottles of perfumes and lotions.  Instead, she’ll spray fragrances on blotter cards and drop dollops of lotions into customers’ hands, she said.

In her small store, 600 square feet, she will install a Plexiglas partition at the checkout counter and floor decals indicating that people should keep 6 feet of distance from each other. She’ll also hang signs telling customers they must wear face masks, and increase the frequency of cleaning.

“I’ve been in retail for over 30 years and I’ve seen the ups and downs,”  Cucchi said.  “And I hope to get through this.”