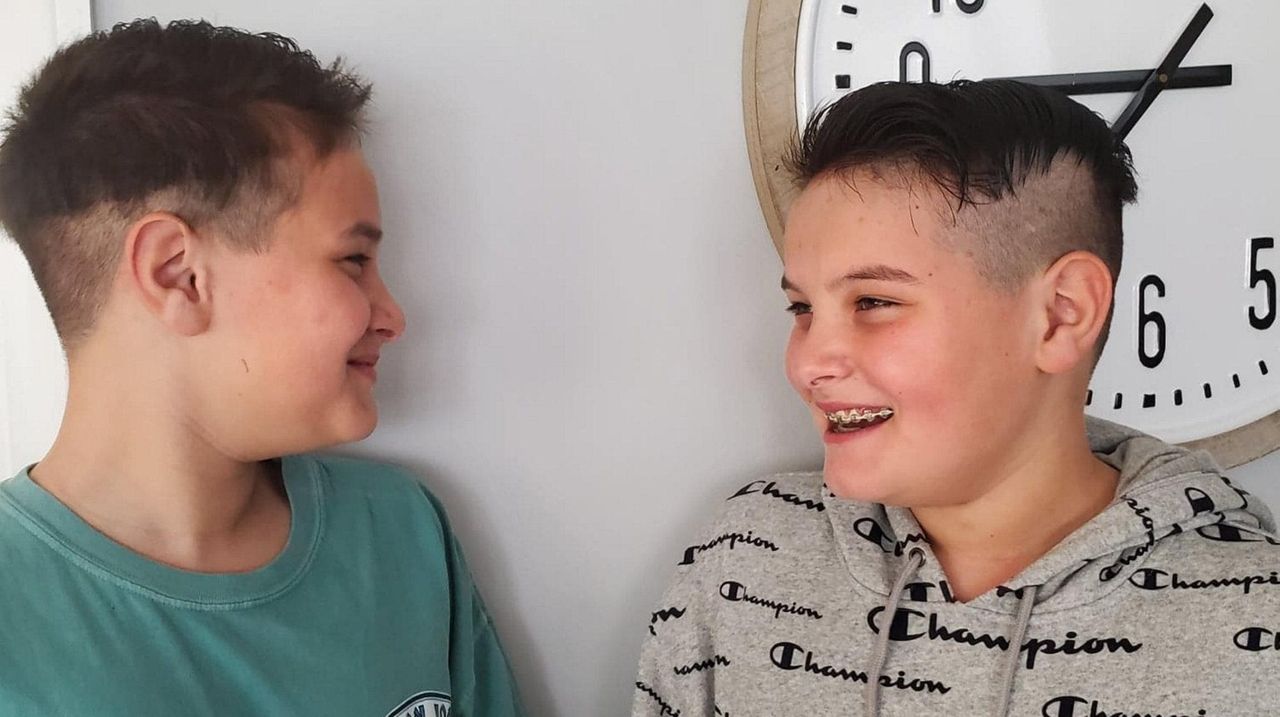 Newsday is opening this story to all readers so Long Islanders have access to important information about the coronavirus outbreak. All readers can learn the latest news at newsday.com/LiveUpdates.

After about one month without access to their go-to salon professionals, dozens of Long Islanders with little to no cosmetology experience decided it was time to pick up the scissors, hair dye and nail trimmers themselves. The results?

“I’ll just leave this here,” Roslyn mom Heather K. Burgoon wrote in a Facebook group alongside a photo of her 4-year-old son, Calvin Ostrow, smiling with a noticeably crooked haircut.

“His hair was getting into his eyes,” she said. “His dad [Seth Ostrow] gave himself a haircut and thought he’d try to give him one too.” The trim left Calvin with an uneven coif lining his forehead — which Burgoon has decided to leave, for now.

A similar mishap occurred in the Padormo household last week, where 12-year-old twin brothers Blake and Caden decided to take a stab at creating their own barbershop. “[It was] not so good of a turnout,” mom Lisa Padormo, of Holtsville, said of the half-buzzed, half-chopped, yet still overgrown hairstyles her sons concocted.

While some with overgrown locks and lifting gel and acrylic manicures found themselves in dire need of a trim, chop or change, most admitted to seeking an at-home beauty treatment out of a mix of boredom and intrigue.

“We’re going a little stir crazy,” Melissa Roth, a stay-at-home mom from Shoreham, said of her three children. “My oldest is 20, she put her hair in a ponytail and cut it off herself.” Roth cut an even 3 inches off her 9-year-old daughter Isabelle’s hair last Wednesday after noticing it was getting too tangled.

Jamie Gale, 41, of Commack took the bold move of dying her previously blonde locks pink and orange without the assistance of a salon professional — and she was pleased with the results. “I used a product called Overtone,” she said. “I got sucked into a Facebook ad!”

For Maria Beckles-Gordon, 44, of Valley Stream, swapping her braids for her natural hair was a must after she realized she wouldn’t be able to make it back to her salon, African Hair Braiding in Queens, for quite some time.

“It was quick. Probably about 20 minutes because they were jumbo cornrows … Natural hair for black women can be a challenging process,” she explained, adding that she was about to try to wash and twist her own hair. “Today is actually what we term ‘wash day,’ because it takes time to get through the process of washing, deep conditioning and protective styling,” she said.

Others are using the salon experience as a bonding opportunity, offering to help their significant other make the big chop. Allison Storck, 30, of Northport, tried her luck at cutting her husband Bobby’s hair on Saturday for the first time and managed to maintain his barbershop look. While Jenn Davies, 31, of Coram, who studied cosmetology in high school, said she gave her husband, Sean Davies, 32, a successful buzz cut and fade.

But now, Davies is resisting the urge to trim her own. “The ends of my hair are so dead,” she said. “I am thinking of doing a blunt cut to get rid of the split ends but I’m trying to hold off until I can see my hairdresser … I don’t want to come out of this looking like a crazy person.”

She has also attempted to recreate her nail salon’s technique for soaking off gel polish (acetone-soaked cotton balls on nails wrapped in foil).

“I left it on for 20 minutes. Nothing happened,” she said, adding that she eventually resorted to “ripping” the polish off out of fear of getting an infection. “It was not fun. It was painful and my nails are so dry and brittle now.” She offered a tip for those who’ve been putting off the dreaded at-home soak: “Use pure acetone.”

Others who dabbled in the nail arena were a bit more successful. Kayla Doyle, 23, showed off fresh powder-dipped nails she did herself. “I’ve been doing powder dip at home for about a year now. It saves so much money,” said Doyle, who’s currently finishing her spring semester at the Fashion Institute of Technology at her home in Commack.

Mandy Miller, 43, of Centereach, ordered an at-home gel kit on Amazon when she realized she wouldn’t be able to make it back to the salon. “I figured I’ve watched them enough times at the salon, how difficult could it be?” Miller, who’s staying at home with her three children, aged 3, 6 and 9, and her husband, said setting aside the time to use her GHDip nail kit was “a nice way to pamper myself” in a “super stressful” time.

Showing off a photo of her fresh purple manicure, Miller added, “I’d say I was successful.”