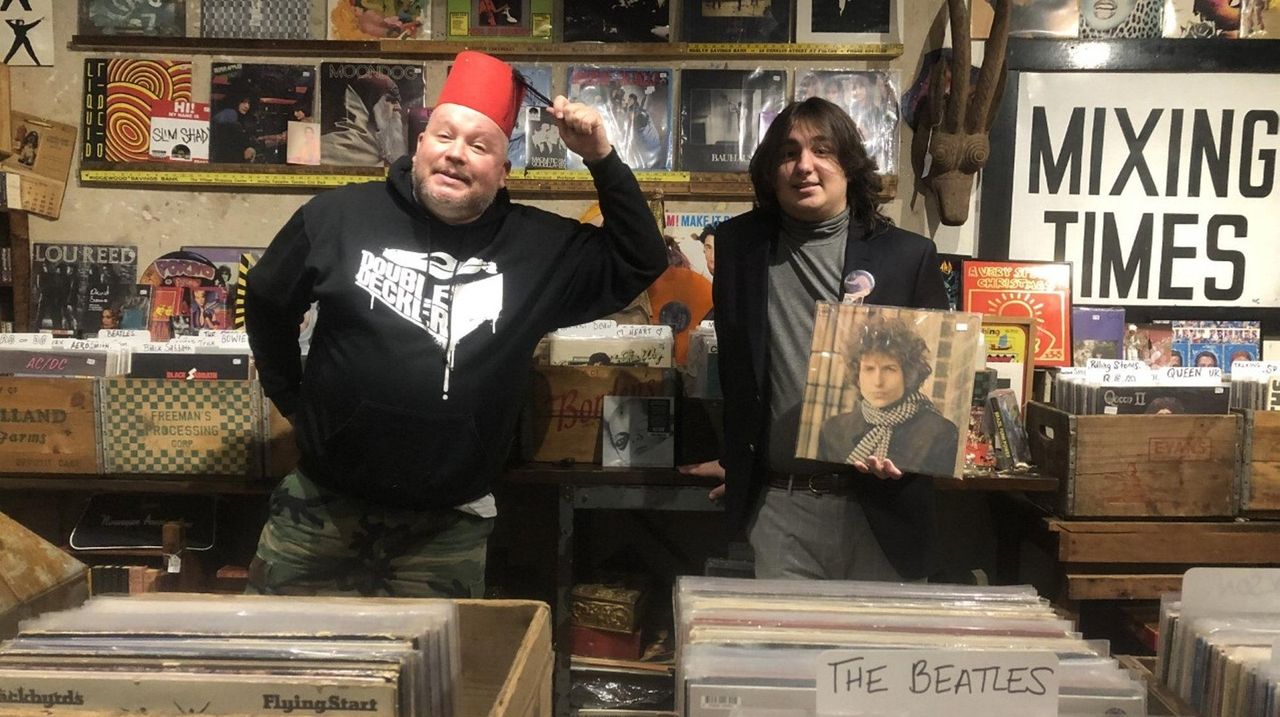 “He was actually a good customer of mine, and to be so interested at that age reminded me of a younger me,” says Schipper who met the now sophomore at Portledge School in Locust Valley years ago at various flea markets. But, says Schipper, when Williams asked, “’Do you want to open a record store with me?’ I thought he was crazy. And I said to myself, ‘I’m not opening a store with a 15-year-old.’ “

It took some convincing, and investigating Sea Cliff. The quirky 750-square-foot store with wooden sloping floors was the clincher. “I felt like it could be Pop’s Garage meets a little Boho. But it was all Luca’s idea. Believe it or not, he’s teaching me about being a professional adult — he’s a preppy adult child,” says Schipper. “I’m teaching him about music he’s never heard before.”

A collector since he was 11, Williams got the idea after he successfully created a pop-up shop a few times next door to Moonshot at a family friend’s store. And when he saw the neighboring storefront had been vacant for a few months, he says, “We knew there was a market in town for records, music and memorabilia, it seemed like a no-brainer. Andrew didn’t take me seriously at first; he was definitely dubious and there was a lot of persuasion. I was a sophomore asking him to open a record store in the middle of a pandemic — it’s a little crazy but then it all fell into place.” For the record, Williams, signed the lease for the shop (co-signed by his mom).

Moonshot is divided into separate sections — mostly records. Williams, whose company is dubbed “Superior 138 Records,” has a standard rock collection of about 225 items here (he has another 1,500 stored at home) that includes Beatles (his favorite), David Bowie, Bob Dylan and more and runs from $5 for a “well-loved” album to $60 for a rarer record.

Hottest band in the store right now? “The Grateful Dead,” says Williams. We can’t keep it in.” Schipper, whose company is “Wormhole Vinyl,” goes the other way. “I’m into thoughtful punk,” says Schipper who also deals in kitschy antiques in the back of the store that run from $1 for a postcard to $250 for a kooky fireplace mantle that converts to a bar. His record collection is massive — about 10,000 albums here and very “old school and I’m into Shoegazing,” he says of a late ’80s genre of Indie and alternative rock from the UK. His priciest piece is $250 for a “very rare Skip Bifferty.” — an English psychedelic rock band formed in 1966.

Finally, there’s an area devoted to vintage clothing courtesy of Crazy Lady Vintage, owned by Lisa Leonardi, 62 of Huntington, a former high school orchestra teacher who has been selling from home and on Etsy. “It’s a lot of fun working with Andrew and a 15-year old. We’re very different and similar too and we sort of attract the same customer base.”

So far, the kooky collab is successful, says Schipper. “It’s a little bit of an escape and a break. And during COVID, it’s just so nice to have a conversation.” And for the future: “It’s a reality show waiting to happen.”