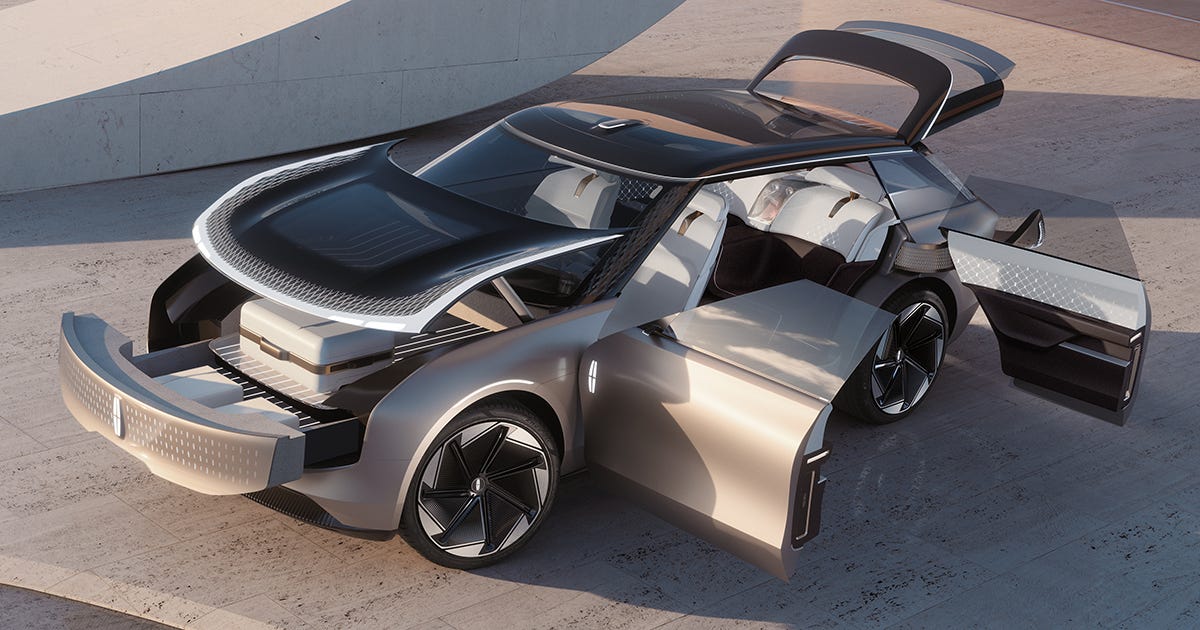 
Like pretty much every other luxury brand, Lincoln is looking towards a fully electric future, and its new concept car is a preview of what’s to come. Called the Lincoln Star, this electric luxury SUV debuts a new Quiet Flight design language that will be found on three production EVs the brand will debut by 2025, with a fourth to come in 2026.

The Star takes the form of an Aviator-like crossover with a dramatically raked roofline, beautiful surfacing and unique proportions. It’s got a much shorter nose than Lincoln’s current rear-wheel-drive-based SUVs but a long rear overhang, with the rear glass and lower half of the hatch coming to a sharp point. The Star’s front end features a redesigned Lincoln logo set into a grille-less fascia containing dozens of smaller, lit-up emblem shapes, topped by a slim light bar that wraps onto the fenders with crosshatched lines that fade into the black borders of the see-through hood.

The interesting light elements don’t stop there. As on other Lincoln models the taillights are a continuous light bar, but on the Star the housing turns down at the edges and contains more of that lattice pattern. The rear Lincoln script is illuminated, and the hatch contains the same repeating emblem pattern as the front end. The front fenders have illuminated Lincoln logos, and each wheel arch has an LED strip following the contour of the opening. The Range Rover-style black roof has a light strip around the entire edge where the roof meets the pillars, and the lidar sensors, door buttons and mirror cameras have small lights as well.

One of Lincoln’s most iconic design features are the suicide doors made famous by the 1961 Continental, and the Star concept takes that idea a few steps further with one of the craziest frunk and hatch setups I’ve ever seen. The front fascia slides forward like a desk drawer — something Lincoln has played with in past concepts — while the hood opens vertically up and back. That drawer section stows under the frunk’s main floor, with both surfaces featuring light-up lines, and there’s enough space above it for multiple pieces of luggage. The hood uses electrochromic glass that can become opaque at the touch of a button, letting light in when the car is in motion but hiding valuables when parked. At the rear, the glass opens up and the hatch folds down to reveal a lounge seat that’s perfect for fancy picnics.

A massive curved screen spans the entire dash, which is inspired by airplane wings. There’s a smaller secondary control screen below the dashboard, along with the gear selector buttons, and a center console between the seats contains a rotary control knob and door buttons. The interior uses a maroon and white color scheme and is covered in gorgeous materials like glass, leather-alternative textiles and gold-colored metals, and there’s tons of illuminated Lincoln logos and lattice patterns throughout. The A- and D-pillars use a 3D-printed metal structure with a lattice pattern that allows them to be see-through from the inside of the car, adding to the sense of airiness.

The front bucket seats have screens on their backs for rear-seat passengers, and they can swivel around to face the fixed second row when the car goes into autonomous driving mode and the steering wheel is stowed away. The sculpted, reclined rear seats have an integrated champagne fridge with glasses, extendable footrests with storage compartments for slippers, additional glass controls and tray tables. There’s also the Lincoln Attache, secret storage compartments in the rear doors that can hold devices like laptops and tablets, wirelessly charge them and receive data.

Lincoln says the Star has different “rejuvenation modes” that turn the car into an immersive digital sanctuary by using three of the senses: sight, sound and smell. Coastal Morning mixes sounds of the ocean with the smell of sea mist and dynamic lighting that mimics a walk along the beach at sunrise, Mindful Vitality uses uptempo music with flowery perfume and soft lighting, and Evening Chill pairs an evergreen scent with videos of the night sky and calming sounds. Each mode was designed around the human body’s “natural circadian rhythm” of the day’s cycle, and it all does sound very nice, but there’s one major problem: Lincoln doesn’t say anything about whether the Star concept has massaging seats. If it doesn’t, that’s a huge miss.

Most of the Star concept’s coolest design flourishes are pure fantasy, but it’s easy to see how its styling will translate to tangible Lincoln production cars. The Star’s new face, specifically, will make its way across the lineup, and Chinese-market cars like the Zephyr are already using full-width interior screens. Lincoln says over half of its global production will be EVs by 2025, with that number only to grow from there. While Lincoln says it will introduce three new EVs by 2025, previous reports said the brand would come out with five, all of which will be SUVs. The first is likely to be an Aviator-size crossover — likely directly previewed by the Star — that will begin production in Canada in 2024.


Get the Roadshow newsletter

See the latest cars and automotive trends from supercars to SUVs. Delivered Tuesdays and Thursdays.