Inside the Mall Where Chinatown Meets High Fashion 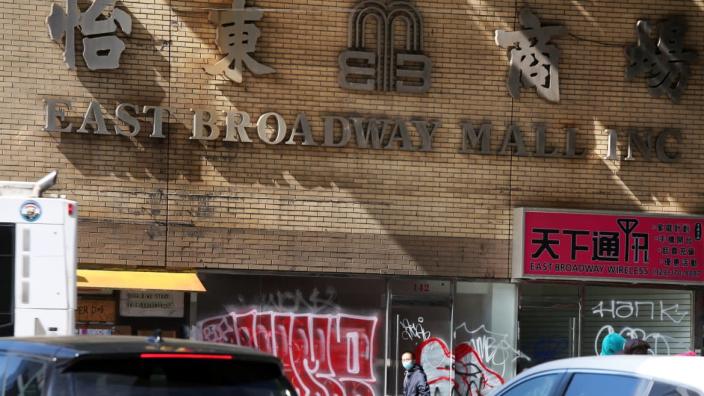 On a sunny, sticky Tuesday in June, foot traffic at the 75 East Broadway Mall, one of the oldest and largest malls in Chinatown, is minimal. The two-story building sits directly beneath the Manhattan Bridge, and the floor frequently rumbles as subway cars pass over. On the first floor, Chinese proprietors flit in and out of modest storefronts—a beauty salon, a streetwear shop, a check-cashing station—chatting into iPhones and ringing up the occasional buyer.

The End of New York: How One Blog Tracks the Disappearance of a Vibrant City

Just inside the street entrance at 75 Broadway on the right hand side, a directory posted in green Mandarin lettering indicates the location of different shopfronts. Three stickers posted over potentially defunct businesses point to newer tenants. Eckhaus Latta, the RISD-born, gender-fluid clothing brand that’s become a downtown staple in just over a decade, Reliquary, an antique jewelry seller specializing in solid gold investment pieces and James Veloria, a vintage and pre-owned clothing boutique, all rent spots in the mall.

Unlike the Chinese wholesalers, though, these downtown-cool businesses all take up residence on the second floor. Upstairs, although the same, nondescript rooms comprise the available retail space, the wares and clientele couldn’t be more different: artfully dressed downtown kids pick through racks of discounted Alexander McQueen jackets and pore over delicate gold rings, swaying absently to hyperpop.

Back on the first floor, in a few brisk steps you can exit through the rear of the building, stepping out into an open-air grocery market. Ouyang Aineng has sold seeds and honey here for the past three years, and most of his customers live in the area.

Although Aineng has only worked at 75 East Broadway for three years, the shopping center itself has been in business for over 20; it opened in 1994 across the street from the East Broadway Mall, located at 88 East Broadway.

The malls have been centerpieces of the neighborhood for decades—88 East Broadway opened in the 1980s—but in recent years, both shopping centers have been hit hard by tenant departure and pandemic-induced foot traffic losses.

“The owners are looking to recreate the identity of this mall and hopefully bring some galleries that are looking for small/large spaces or finding working office tenants into the mall,” broker Christopher Lam told Bowery Boogie. “The owners are also willing to divide if a new tenant is interested in only part of the floor.”

A spokesperson for the Department of Citywide Administrative Services told ABC7 that 88 East Broadway’s current operator has neglected the building and failed to pay rent, and now owes the city of New York $13 million.

In the few years since the initiation of the “character makeover,” 75 East Broadway has changed significantly. The property is owned by New York City, but the real estate company Wing Fung LLC is in charge of leasing out the space, according to Parinaz Mogadassi, who used to rent space upstairs for Tramps gallery.

The building manager of 75 East Broadway, which also goes by the name 2 Bridge Mall, declined to comment when reached by phone, but Loung Chen, Aineng’s friend, said the building manager doesn’t really know who shops here, and only genuinely cares about the more upscale businesses on the second floor. “I think that he knows nothing,” Chen said.

A few vacant lots are available on both the first and second floors, but across the street, 88 East Broadway is almost entirely vacant and palpably worse for wear.

Wenting Zheng’s mother, Jenny Wu, has worked at the 75 East Broadway for at least 10 years running three separate businesses, Zheng told The Daily Beast. Two former businesses were on the second floor, and the business Wu currently runs, a women’s clothing store, is on the first.

“Due to people not showing up, obviously, this meant that there were less people going to the second floor, and it was a better option to move to the first floor,” Zheng said. Wu also sells restaurant supplies, and moved her business to the first floor around four years ago, Zheng said.

“What happened on the second floor is that there was no one renting it,” Zheng said. “I grew up there,” she said of the mall. “I ran around, and I knew every aunt and uncle in the whole mall. I hung out there every single day.”

Xenophobic paranoia sparked by Covid-19 has contributed to devastating economic downturns in Chinatowns in many American cities. Jing Fong, the largest restaurant in New York City’s Chinatown, barely weathered a harrowing, 85 percent dip in revenue last year, but has since returned.

Positive developments such as this might indicate that things are on the upswing (if not for skyrocketing reports of horrific anti-Asian hate crimes in New York City, and many other major metropolitan areas).

According to the Chinatown Business Improvement District/Partnership, at least 17 restaurants and 139 ground-floor stores in New York City’s Chinatown permanently shut down during the pandemic. Two years into New York City’s new, Covid-tarnished reality, retail jobs are down 13 percent and one in three storefronts in Manhattan are vacant.

“I think it’s nice,” Zheng said of the second floor businesses at 75 East Broadway, “but I also think that this mall was mostly an Asian mall, so it kind of fell apart because of COVID. A lot of people have left, and everyone on the first floor are literally the last people that we know.”

“It used to be a very busy area,” a woman named Ying told me; her father works in the salon downstairs. “Most of the stores in the mall are closing right now. I heard on the news that they’re trying to remodel, but I’m not sure. The rental fees are getting higher every year, and most shop owners just can’t afford it, so that’s why they have to close down.”

In November, New York state Governor Kathy Hochul announced that Chinatown would receive a $20 million rehabilitation grant, part of which will go towards reimagining the East Broadway Mall.

A smaller-scale reimagining, though, has already been underway for years, right across the street. Tramps gallery, founded by Parinaz Mogadassi and currently run by gallerist Michael Werner, was the first new tenant to take up residence on the second floor of 75 East Broadway.

“The space is ingeniously low-cost,” Time Out wrote in 2018. “Instead of a conventional gallery with attendants, Tramps consists of ten tiny glass-walled shops originally meant to house vendors on the second floor of a Chinatown mall.”

Not everyone was pleased.

“[German artist Kai Althoff] and Mogadassi occupy territory in a neighborhood under siege by real estate developers who use art galleries as Trojan horses for gentrification,” a review in 4Columns spat.

“We opened in early 2017 and let go of our leases May 31, 2022,” Mogadassi told The Daily Beast. “Didn’t like what the mall became: the general sense of self satisfaction, lack of mystery and abundance of bad taste.”

“I don’t feel connected to those upstairs businesses,” Mogadassi said. “Many opened up quite a bit after we opened. We have very different sensibilities… and I would never have wanted to open a gallery up there if there were already a bunch of other galleries operating out of those spaces. It’s precisely for this reason as a gallery we never participate in art fairs.”

James Veloria, a vintage clothing store run by Collin James and Brandon Veloria, was another early adopter; they’ve had a spot at East Broadway for five years, during which time they said their rent hasn’t increased.

“We thought that it would be a detriment that there were no windows to the outside and no street traffic, it’s hard to know [the store] is even there, but that’s what kind of made it feel so safe for a lot of people,” James said.

Artist Aidan Doyle has worked for James Veloria for around 4 years. “We’ve had such a great experience here,” Doyle said. “I feel like it keeps us safe and secure, being all queer and trans, and we always are running around the store trying on clothes. It kind of creates a barrier: people who want to be here can come in, and it keeps us safe from people who don’t necessarily want to be in that world. We get fewer people being scary.”

“We’re fortunate that a large portion of the artists we work with are our friends,” 8Fields founders Brittany Ljal and Gabriela Basyuk told The Daily Beast. “Our main goal is to work with anyone who is doing something we feel is unique or rare.”

“When Tramps gallery was still here we would frequently visit to see the new shows, shop at James Veloria and of course Eckhaus Latta,” Ljal and Basyuk added. “We always talked about how amazing it would be to open up a space here, so we wrote a pitch to the builder manager and it ended up working out. We really value the community and people that make up this space.”

As things stand, there’s a clear delineation between the thriving, thoroughly 21st century businesses upstairs and the struggling ones downstairs and across the street, a state of affairs that reflects the uneven challenges faced by different kinds of business owners and their employees. The upstairs tenants at 75 Broadway are not unaware of these challenges.

Crystal Stratford opened a physical location for Reliquary, her antique jewelry business, on the second floor of 75 East Broadway two weeks ago. The small space is lined with real moss and displays fashioned from real, large mushrooms, giving the shop the appearance of a lush forest grotto.

The mall’s future remains in flux. “The newish property manager (who holds the commercial lease) is all about the bottom line,” Mogadassi said. “From what I have heard, (but not entirely sure) is that he has now the sublease of the bottom spaces as well, so things inevitably will change further.”

Visiting the mall, you also get the sense there’s burgeoning potential for collective organizing that is, thus far, unrealized.

“We all get along well and chat often,” Stratford said of her fellow tenants, both upstairs and downstairs. “I personally have never had a conversation surrounding organizing or banding together. We all respect and get along with our manager (and to my understanding the new building owner) very well. He’s very flexible and kind. I am not sure what the future holds. The options are limitless.”

Read more at The Daily Beast.

Get the Daily Beast’s biggest scoops and scandals delivered right to your inbox. Sign up now.