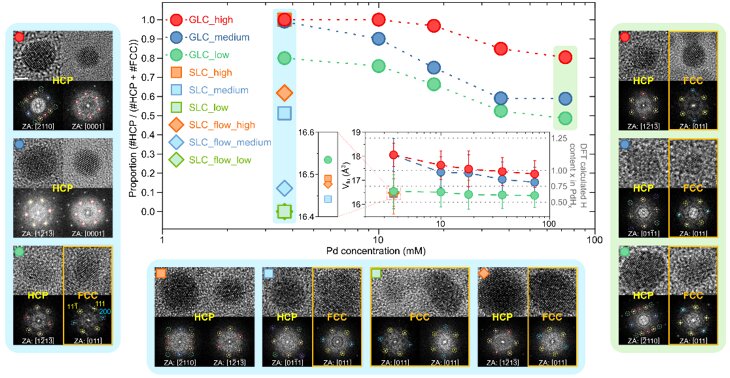 Similar to the widespread interest in graphite and diamond, there is growing interest in metastable phases, which have different physical properties than those of stable phases. However, processes to fabricate metastable-phase materials are highly limited. New findings have been published in the latest issue of Nature about the development of a new metastable-phase synthesis method, which can drastically improve the physical properties of various materials.

To elucidate the theoretical basis and scientific evidence for these findings, the research team used atomic electron tomography, which reconstitutes 3D images from 2D electron microscope images for nanometer-sized crystals in a metal hydrate, for analysis. As a result, they demonstrated that the metastable phase was thermodynamically stable, identified the 3D structure of metastable-phase crystals, and suggested a new nanoparticle growth mechanism called “multi-stage crystallization.” This study holds significance as it reveals a new paradigm in metastable-phase-based material development when most research is focused on developing stable-phase materials.

Dr. Chun said, “These study findings provide an important process to obtain source technology in the development of advanced alloy materials containing lightweight atoms. An additional study is expected to reveal a new paradigm in the development of metastable-phase-based eco-friendly energy materials that can store hydrogen and lithium. Similar to the Czochralski (CZ) method, which is used to produce single-crystal silicon, a key material in today’s semiconductor industry, it will be a source technology with great potential that will contribute to advanced material development.”

This document is subject to copyright. Apart from any fair dealing for the purpose of private study or research, no
part may be reproduced without the written permission. The content is provided for information purposes only.