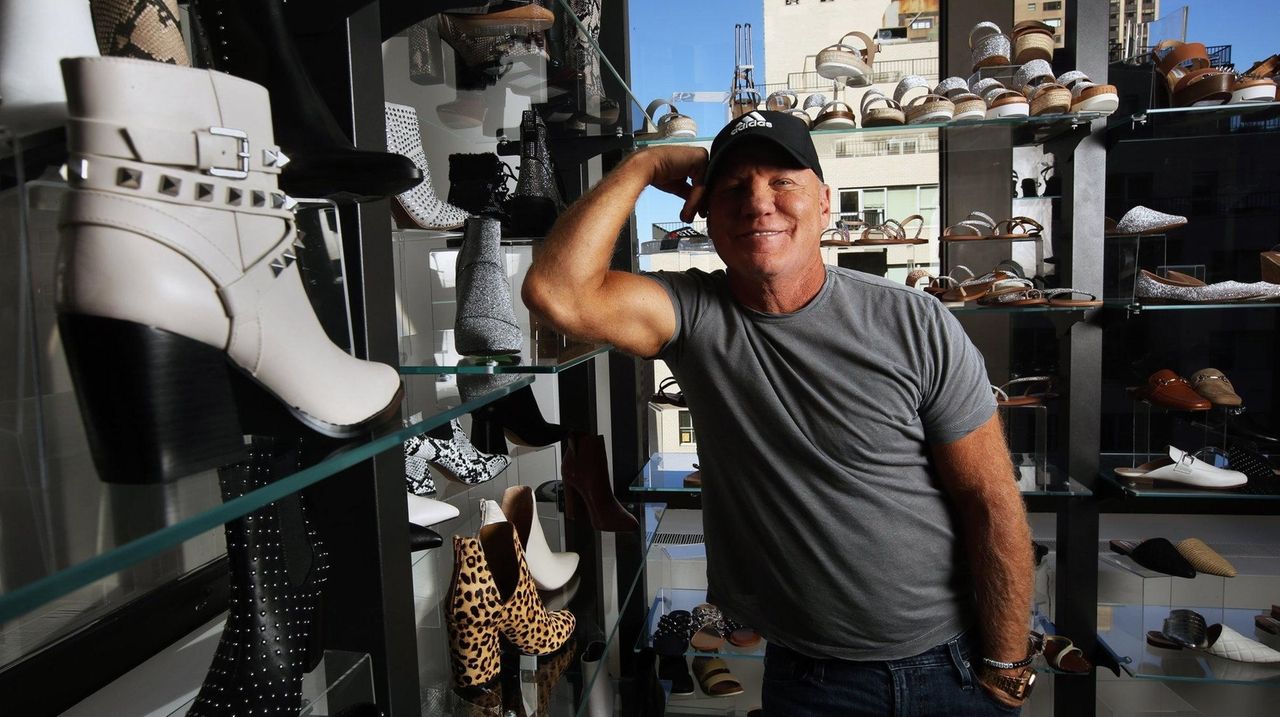 “I want to buy every copy of this book and burn it,” says shoe and fashion mogul Steve Madden, 62, of his new memoir “The Cobbler, How I Disrupted an Industry, Fell From Grace & Came Back Stronger Than Ever” (Radius Book Group, $26.99). He could do it. He is, after all, the founder and chief creative officer of a multi-billion-dollar company and virtually a household name.

It is indeed, a deep dive into Madden’s rise and fall and rise again. Madden, a college dropout, who grew up in the Five Towns, was the youngest son of an Irish-Catholic textile executive and a Jewish mother who according to him, “couldn’t stand me,” learned the shoe biz from some of Long Island’s best. But his path to success was far from direct. The memoir documents his battles with drug addiction and a too-late-for-school diagnosis with ADHD.

There’s also a harrowing description of the 31 months he spent in prison after committing securities fraud. In fact, the title is lifted from Jordan Belfort, former stockbroker at Stratton Oakmont in Lake Success (think Leonardo DiCaprio in “Wolf of Wall Street”) who masterminded the crime and nicknamed Madden, “the cobbler.”

Today, Madden, who has a home in Sag Harbor, old friends in Inwood where he visits and often golfs, says he’s in a good place in his life after three decades in business. His memoir recalls the steps (and missteps) getting there.

So, this book is very revealing and seems a bit like a confessional. Is it?

I wanted to tell my story as honestly as I could but now, I wish I hadn’t. It feels like just too much. I was too honest. My process was sort of admitting my foibles, it’s a way of getting rid of them, don’t you think? I basically talked this book. At the time when I did it, it didn’t feel so raw. It was just telling my story conversationally and honestly and it didn’t feel too, too bad. But now, I wish I could take it back. I let it all hang out. When most people are telling their story, they’re trying to make themselves look good. (Laughs) I wish I did that.

You’re a real Long Island guy, who were some of your major influences here?

Lance Rubin owned Toulouse in Cedarhurst … was the first guy who taught me that you could be funny, creative and still be cool. He was the first hip, successful designer I ever met. Here was this 28-year-old dude driving with a gold Mercedes.

Jack Bienenfeld [founder of Jildor Shoes] … taught me the biggest lesson — to take care of the small things in a business. Little things like the sign outside a door or a window display are very, very important. That’s a big part of who Steve Madden is today.

But my dad, Jack, was the strongest influence. He taught me the meaning of hard work and the love of reading books.

You write a lot about addiction which almost crushed you more than once. Do you ever think about it?

Every single day. I don’t use drugs or alcohol but my addiction is with me every day. It’s been particularly tough with COVID because we don’t have AA meetings except on Zoom. The pandemic has been really brutal. Human beings have survival instincts, we sort of figure it out. For sure, addiction doesn’t go away, it just gets arrested.

OK, in the movie “Wolf of Wall Street,” your story gets pretty major play. Love it or hate it?

They had a special showing for us and I was so nervous. But it turned out that it was a well-done and funny movie, and it didn’t make me look too bad. I think Jake Hoffman gave a very great performance as me. He didn’t look like me — he has great hair and is much more handsome, but he dressed liked me.

Do you ever reflect on your time in prison?

Jail is the worst, most horrific experience. But I learned there that there’s good in everybody and even though we were all from different walks of life everybody deserves a second chance.

You write about a lot of celebrity collaborations you’ve done with your brand. Who stands out as the most fun and who was the worst?

I loved working with Ja Rule … If you go out with Ja Rule, you’re going to have the most fun. I enjoyed working with Cardi B, too. Iggy Azalea was terrible. She did a gig for me and I was very impressed. But she lost her mind when she became successful and sabotaged the project. The Olson twins were very serious, smart and passionate but sometimes there’s only room for one diva, and that diva’s name was Steve.

In the book, you describe running after women to find out about their shoes. Do you still do that?

I’ve got to be careful these days because I’m older and people will think I’m weird. I’m definitely more cautious but sometimes I can’t help myself. I was just in Citarella in Bridgehampton and I saw this young girl with these cute slippers and I had to ask.

So, what’s next for Steve Madden?

We’re making great progress in the area of sustainability and have a whole department devoted to it. I’m four chapters in on the audio book [of his memoir] and it’s whipping my kishkes out. I forgot about the book because of COVID, and I haven’t looked at it, and I’m reading it and it’s so personal … uchhh. And there’s some interest from Hollywood in turning it into a television show like “Succession.” … Stay tuned.